The Birth of Stars and THE TOM AND JERRY STORY
A cat, large, gray and devilish, a Machiavellian glint in his yellow-irised eyes, and a mouse, small, brown, cherubic yet cheeky, chase each other around a kitchen, demolishing the ice box, ironing board, plate rail, a whole sink full of dishes and littering the floor with egg shells, dripping yolks and oozing jam.

The kitchen battle wages on, its final outcome unknown to the participants. But to the people watching in the warm darkness of the theater, there is little doubt as to the identity of the victor – it will be the little mouse.

For the cat and mouse are Tom and Jerry, and this, of course is a Tom & Jerry cartoon.
The ever-dueling duo have chased each other from the Hollywood Bowl to Hungary to out space and back, and fifty years after their movie debut, are still going strong. Vintage Tom & Jerry cartoons still play at the cinema, on television, and are packaged for sale or rental on videotape. 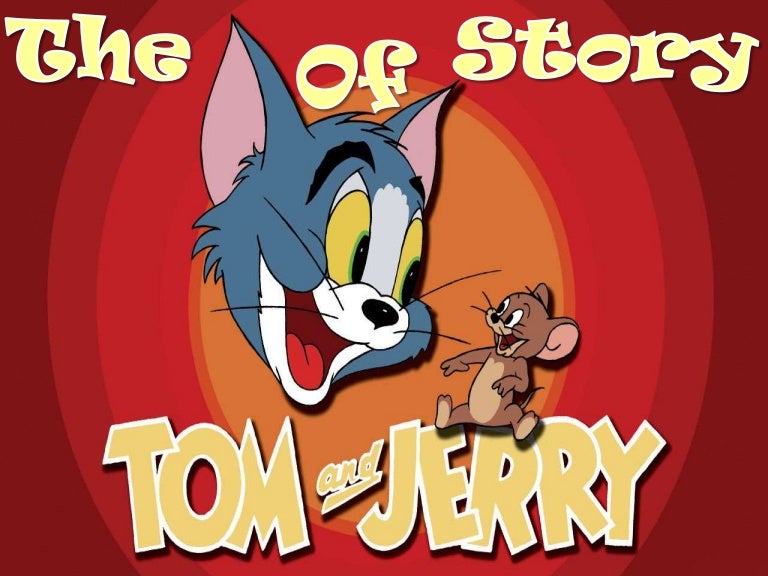 Born in Hollywood, Tom and Jerry have captured the delight, and the laughter, of audiences around the globe, garnered enough Academy Awards to make any movie star selfishly smug, and starred in motion pictures, television and comic books. (p9)

And, Tom and Jerry have very definite personalities. Tom is a fiendish opportunist, always anxious to ingratiate himself with the powers that be, whether housekeeper, dog, or even, on occasion, mouse; while Jerry, the impish schemer, is happy minding his own business until cornered, piqued or generally provoked. (p16)

To discover their secret, one must turn back to the place of their creation, the MGM main lot in Culver City, California. Here, in a round-cornered, two-story, cream-colored stucco building containing a rabbit warren of rooms for animators, layout artists, in-betweeners, ink and paint girls, cameramen and movieola machines, Tom and Jerry leaped magically to life. (p 21)

The Fred Quimby Years
Fred Quimby, producer for not only Tom and Jerry but the entire MGM cartoon divisions. Since 1937 he had ridden herd on a zany cast of cartoonists of whom he understood little, having, unfortunately for a cartoon producer, no sense of humor to call upon.

Common belief on the main lot was that Quimby had won his producer’s title due to long years of service as a top salesman in New York, from whence he came. Indeed, he knew nothing of animation and, as Irv Spence recalls, cartoons “were a strange thing to him.”/

Cast in the role of high school principal opposite the animators’ boyish enthusiasms, he acted as liaisons between them and the front office, usually it seemed, turning down requests for bigger budgets, raises and special dispensations of funds.

But under his stewardship, Tom and Jerry sailed along like a flagship on a balmy sea.

After 18 years at the helm of the Cartoon Department, Quimby retired, and here was where the storm clouds began to glimmer. (p 83)

Quimby’s retirement in no way hampered the creative flow of the Tom and Jerry cartoons, but his leaving signaled the beginning of the end of an era, the Golden Age of Hollywood, in the worlds of both action and animation.

And the world was already beginning to change.

Box office receipts fell, and then plummeted. Movie studios began to worry, and then to panic.

Cartoons, too, were forced to submit to the CinemaScope rage. Tom and Jerry’s first such outing was Pet Peeve, in 1954. (p 85)

The Gene Deitch Years. 1961-1962
In 1957, MGM, without warning to the crew, closed down their Cartoon Division, putting Tom & Jerry in cartoon limbo, and Hanna, Barbera and staff without a job.

“We didn’t have anything to do,” recalls Bill Hanna. “We saw the rest of our cartoons through, but we knew they weren’t going to pick them up.”

At that time, cartoon production at other studios were limited and no one was doing any hiring. They created Ruff and Ready, selling it to Screen Gems,. Thus, Limited animation was born. You can blink the eyes and not move anything else. If the body held and you reach out for something, only the arms move.”

He had recently moved self and studio to Prague and his Czechoslovakian animators had only half a dozen Tom & Jerry cartoons to use in familiarizing themselves with their new characters.

In contrast to Hanna, Barbera, Irv Spence, Ken Muse and the other animators at MGM, who collectively were Tom & Jerry, the Eastern European team never stood a chance of continuing the old magic.

Despite all this, there were likeable elements; however, the overall cartoons fell short of the originals on which they were based. Deitch’s contract was not extended beyond the first 13. (p 93-98)

The Chuck Jones Years 63-67
When Warner Brothers closed its cartoon doors in 1963, MGM jumped in and offered Chuck Jones the opportunity to animate new Tom & Jerry s for theatrical release.

He set to work, making his first task a remodel of the famous duo.

The Tom & Jerry logo received a facelift, too, with the old title frame replaced by a spiffier 1960s one and new, tinkly music signature. Even Leo, the MGM lion, who had appeared

But these ware the only differences between the vintage Tom & Jerrys and Jones’. Graphically stylish and brightly colored, the latter veered toward poses and personality. Much like Bugs’ plots, they often started out strong and got sidetracked by other ideas. Although this style fit other Jones formats, Tom & Jerry were not the same without a solid story behind them.

Tagged THE TOM AND JERRY STORY